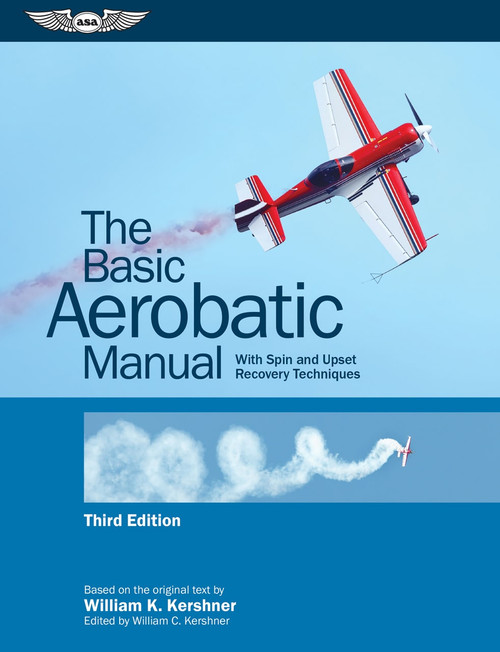 This book is the standard reference for flyers who want to learn aerobatics. Explore basic maneuvers from stalls and spins, to loops and rolls.
Look inside
Description Close Open

The Basic Aerobatic Manual is a complete reference for the beginning aerobatic student, with invaluable unusual attitude and spin recovery information for the more straight-and-level flyer. This book emphasizes techniques for the Cessna Aerobat models, but the described maneuvers easily translate to other aerobatics-certified airplanes.

Starting with stalls, chandelles and lazy-8’s, the student is guided through spins and the Three Fundamentals of basic aerobatics: the aileron roll, loop, and the snap roll. Once these basics are learned, the combination maneuvers (the cloverleaf, for example) are covered in-depth.

This third edition includes a new chapter on loss of control in-flight (LOC-I), the leading cause of fatal general aviation accidents, to complement the chapter on unusual attitudes (upset) recovery for pilots especially focused on flight safety. Returning to controlled flight solely by reference to instruments is examined closely. The chapter on spins and spin recovery benefits from the knowledge gained in over 7,000 spins, each having from 3 to 25 turns, in the Cessna Aerobat.

William K. Kershner started his solo aerobatic career in a Stearman N2S at the age of 17. As a flight instructor, he later operated an aerobatic school in Sewanee, Tennessee using a Cessna 152 Aerobat, until his death in January, 2007. The third edition of The Basic Aerobatic Manual has been updated by his son William C. Kershner.